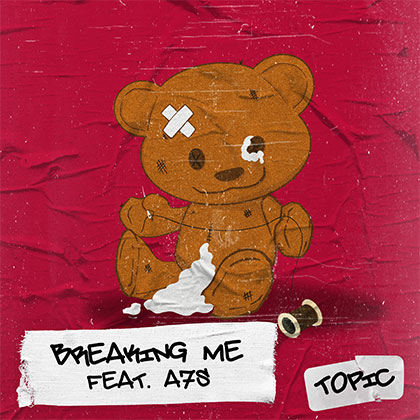 Set to close out 2019 in style, German producer Topic has re-emerged to release his final offering of the year with enigmatic Swedish producer A7S.

'Breaking Me' is an enticing and uplifting pop-forward track, which fans can now stream across all platforms via Universal Music.

‘Breaking Me’ opens with a wildly catchy vocal cut reminicent of a lullaby, leading the listener in with instantly recognizable sing-along acapella. Emotional lyrics paired with bouncing synths and a brilliant bassline combine to form a highly addictive, and radio-ready dance-leaning pop song. Topic and A7S structured the track using the focal point of a hook melody, which they described as 'a meeting point between heartbreak and zestful beats'. Splicing painful memories with uplifting notes, 'Breaking Me' hits the sweet spot and will surely be a hit among both new and old fans of the German producer.

Topic has amassed millions of streams from previous releases, ever since his debut single ‘Light Up’ in 2014, which landed in the charts almost instantly. His most successful track ‘Home’ featuring Nico Santos has achieved platinum status in Germany and double platinum status in Australia.

Following the success of ‘Home’ he released ‘Find You’ featuring Jake Reese and ‘Perfect’ featuring Fifth Harmony vocalist Ally Brooke. Topic’s recent release ‘Let Us Love’ with Vigiland and Christopher is characterized as a typical production style for Topic with inspiring instrumentals and dynamic beats. Topic then released club
track ‘Keep on Loving’ featuring René Miller which instantly makes you want to dance.

As a producer he also landed himself onto the top 30 of the German single charts with Liont’s single ‘Komm mit’. With a rolodex of releases under his belt, Topic continues to blend genres and create alluring house anthems. He closes 2019 on a high note with the release of ‘Breaking Me’, setting the tone of what’s to come from the German producer.