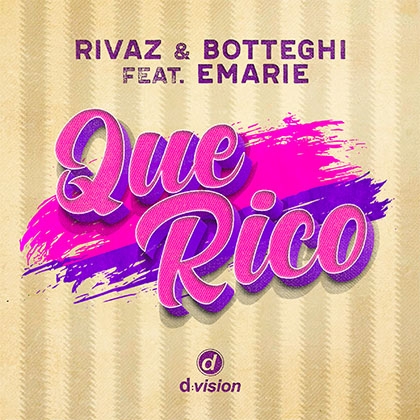 Italian DJs producers duo Rivaz & Botteghi is back after their international Hit "Que se sepa (Yo naci con mi)". They are back this early 2020 with a warm cocktail of Latin House sound "Que rico", remixed in Batucada version, among others, to fire up all the Dancefloors!

Both DJs producers are not greenhorns :

Rivaz Aka Davide Riva is without a doubt the most experienced DJ of Italian scene. He stamped his mark on the 90s by producing Hits for Whigfield "Saturday night", "Think of you" or artists such as JK, KMC Feat. Dhany, In-Grid or The Bitch Hotel.

His producer carreer allowed him to work with many international DJs & artists such as Benny Benassi, Francesco Rossi, Daniele Davoli or Alex Gaudino, and to be the official remixer of LP, Steve Angello, David Guetta, Benny Benassi & Vassy, Bob Sinclar, Dirty Vegas
or Klaas & Londonbeat.

As a DJ, Rivaz opens for Benny Benassi worldwide, and performed alongside Martin Garrix, Axwell & Ingrosso, Laidback Luke or Tiesto in the biggest venues such as Ministry Of Sound in London, Super Paradise in Mykonos or The Wall in Miami.

Botteghi is also a tough cookie. After being DJ resident in many Italian clubs, performing in famous Croatian "Spring Break", he has been casted as Resident DJ of Samsara Beach in Riccione, the reference of Italy's east coast.

On production side, he worked with many Italian DJs, and collaborated to many international remixes for Klaas & Londonbeat, Benny Benassi, DJ Antoine or Federico Scavo.