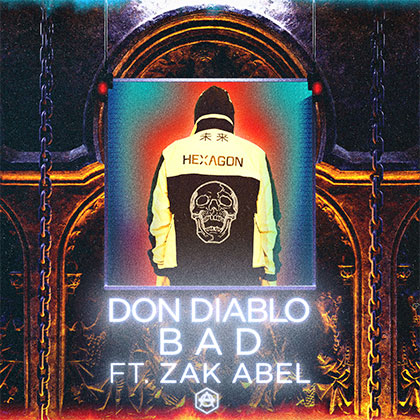 Dutch superstar Don Diablo has unveiled his new single ‘Bad’. An infectious slice of indie house, ‘Bad’ is stitched together with the soaring vocals of Moroccan-English artist Zak Abel, expertly treading the line between floor-filling club heater and chart-ascending smash.

Don Diablo explains:
"Bad is a cheeky track about guilty pleasures, which we can all relate to in one way or another. Musically speaking I really wanted to explore different sounds and push my own sonic boundaries as well as a producer. Bad is co-written with the super talented Elderbrook and features the vocal talent of Zak Abel, both have been high on my collaboration wishlist for years. I literally had the best time recording the vocals in my studio in Amsterdam with Zak and I look forward to performing the song together live for the first time very soon."

DON DIABLO
· One of the most recognizable figures from the world of dance music
· Clocked in at #6 in the coveted DJ Mag ‘Top 100’ list
· His hits include ‘Survive’, with Emeli Sande & Gucci Mane and "Brave" with Jessie J
· Has made official remixes for superstars like Ed Sheeran, Rihanna, Coldplay, Mark Ronson, Miley Cyrus & Anne-Marie
· He is also a regular at all of the biggest clubs and festivals, such as Creamfields, Tomorrowland, EDC Las Vegas, Ushuaia and Hi Ibiza

ZAK ABEL
· Is a upcoming singer, songwriter and musician from the UK
· Lent his head turning vocals to Duke Dumont’s dancefloor smash ‘The Power’ (7 million hits on YouTube)
· Collaborated with international superstars like Gorgon City, Wookie and Avicii.