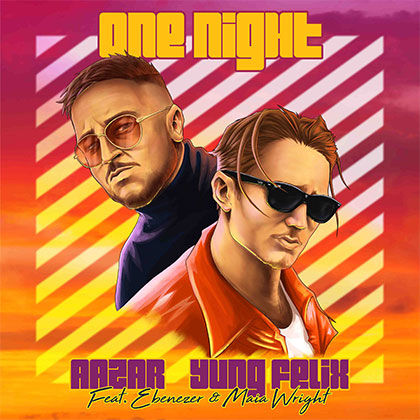 About the Artists:
AAZAR:
With more than 90 million streams, Aazar is one of the most promising artists of the new "Crossover Electro Urban" scene, at the moment.
Supported by DJ Snake and very close to his collectif "Pardon My French", his music is supported by international artists such as Marshmello, Tiesto, Skrillex and The Chainsmokers with whom he collaborates frequently. Aazar has become a flag carrier of the new French scene trending abroad.

Yung Felix:
Producer #1 in Benelux, he got an instant success with his Urban club Hit "Loco" which made more than 85 million streams and more than 110 Million views.
Specialized in mixing Reggaeton and West Indies, his productions always reach their target, and this is why he's always on Shazam charts around the world.

Ebenezer :
Ebenezer is a UK rapper revealed by his performances on Hits such as "Flexin '" from Hip-Hop Irish artist Rejjie Snow and "No Good for Me" from UK producer ADP (2017).
He made a collab with Duke Dumont on single « Inhale » (2018). In 2020 he releases his 2nd mini album Bad Romantic 2.

Maia Wright :
Aged 22yo Maia is the next big thing from Sweden, and a talented performer / song writer.
She made the vocal in « Decisions » by Kream which was in the Netflix serie « Lucifer ». She also performed on Gryffin « Body Back » which reached the top 15 of the Hot Dance / Electronic Songs Billboard chart.